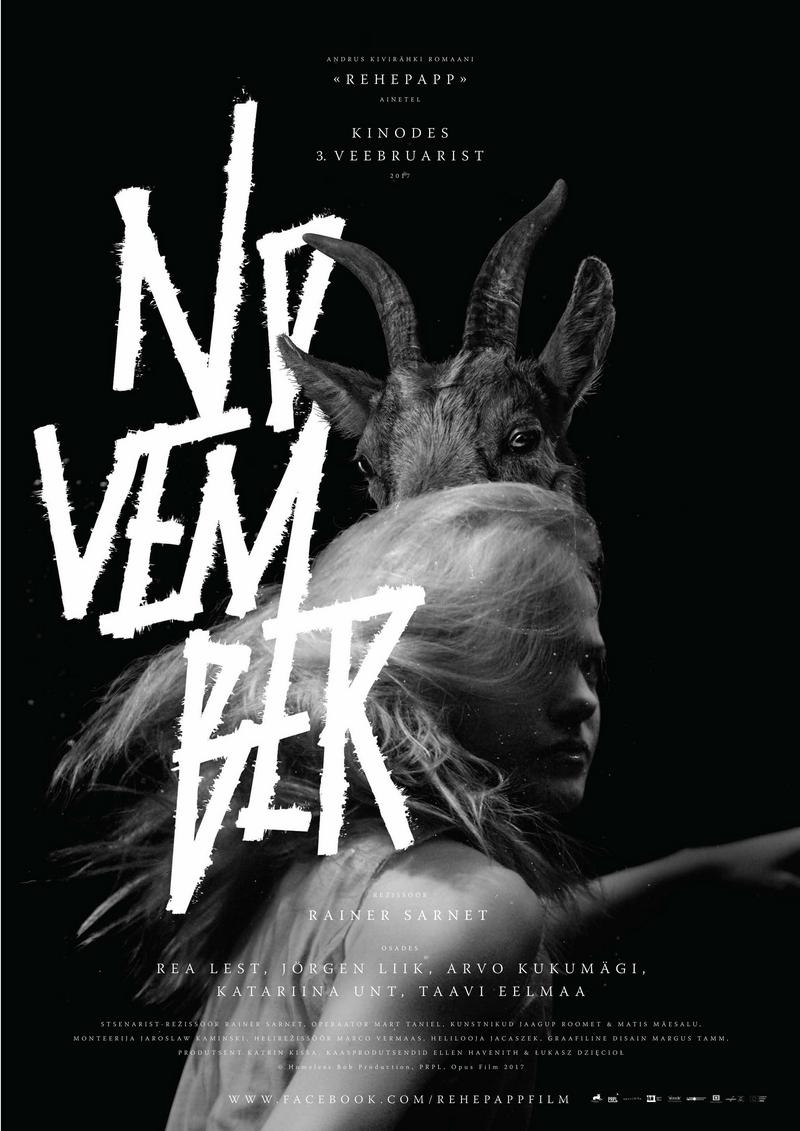 This is one of the best posters I've seen in a long, long time

I caught up with November, Estonia's failed Oscar submission, after being wowed by the above poster, and the good news is that the visual flourish depicted above is carried over to the entire feature. Shot in stark black and white, the film is directed with a sharp eye for aesthetics that look like they belong in the liner notes for a Constellation Records LP. Apart from being nice to look at, though, the film has a real struggle in tone: ostensibly set in the 1800s, the denizens of the small Estonian village depicted here still use a melange of mythic approaches to explain scientific and other phenomena, ala the Ancient Greeks. Sometimes the film uses this idea quite well: the picture's best sequence involves the onset of the plague, which arrives via a beautiful woman who seeks passage across a stream. She kisses the man who carries her across, who immediately turns soot black. The plague's physical manifestation soon takes several additional forms before finally materializing as a sow. The townspeople eventually convince the Plague to pledge to spare two villagers, leading to the unforgettable image of a demonically-squealing pig being given a Bible to swear upon. But as compelling as this may sound, you can prob already spot the problem with this kind of approach: it's just too silly to take serious, and the film gets too silly too often for me to give it the rope to believe it isn't laughing at its own audacity. Even within this sequence, we have an absurd moment wherein the townspeople fool the Plague by putting their pants/skirts on their heads-- ostensibly this is to prevent the Plague from being contracted orally, so there's a certain weird logic to it, but the character who proposes the plan does so by stating it will work because the Plague "won't want anyone with two asses," a comic line that winks at how goofy this is. And that kind of tongue-in-cheek approach is deadly for a movie like this. The film prepares us for this approach in its opening sequence, which is singular in its audacity and absurdity (so much so that I won't even spoil it so as to preserve the pure WTFness of it, which is worth experiencing first-hand if you're actually intending to see this). But while it takes a certain kind of bravado to Go There, it never once works when it's employed here. The film is overstuffed with ideas that don't get fully explored (In addition to the character of the Plague, we get the Devil, a werewolf, a witch, and inanimate objects come to life to do menial labor and recite poetry, among others), too enamored with its obvious influences (Tarkovsky, Pasolini, any given Czech New Wave film, &c), and is disappointingly fixated on the scatalogical, a filthy well it will return to over and over. But there's so much thrown at the wall here that I can truthfully say I was never bored, and the movie is ultimately a noble failure that falls on its face for attempting too much and swinging too wide.
Top

I caught up with November, Estonia's failed Oscar submission...


Liked this one lots; I see your objections, but don’t see them as problems. ‘November’ creates a cohesive medieval-level folklore world where barriers – between human and animal, mechanical and mystical, Christian and pagan, what’s yours and what’s mine, life and death – are differently erected; hard and fast lines between the low and the high and comedy and tragedy don’t belong. The Baron plays Beethoven and also likes to poke at poop, that’s how it is. I’m not a fan of bawdy humor, but the milieu lends itself to this, and I found it well-balanced by general absurdism. It can be silly! And its silliness can be serious. I like that.

There’s something wonderful and correctly fluid in how this movie of the perpetually unwashed uses water: It’s a protective boundary over which The Plague cannot cross unassisted; an in-between world where dead and near-dead lovers can meet; an all-knowing observer, present from the first shot to the final scene.

For conflict’s sake it’s not a catch-all anything-goes world, some barriers must be observed. There are testy occupational Estonian/German resentments at which I can only make the obvious assumptions. And its central love story may be complicated by that plus a traditional class-based triangle, but it’s defined by pitting the romantic at matters practical. I don’t know why Liina should be so infatuated with Hans – beyond being moderately attractive and the only other person in the village in her age group – but they at least share an affection for things that go beyond pragmatism, be it for pretty dresses or faraway stories of doomed affairs.

I scrawled “comedy ‘Marketa Lazarova’” the first time I saw it, and though that probably speaks more to how long it’s been since I’ve seen the Vlacil and what a sieve my memory’s become, a lot of what I liked here is what I recall liking there: Being immersed in a movie at full play within its own rules, orienting yourself by the familiarity of the traditional(*) while delighting in the surprise of alien particulars. I suspect I enjoyed this more than someone familiar with Estonian folklore would.(**)

Some things work better than others; whenever you literally portray a fairy tale element it risks being as awkward as a man in a batsuit or as untenable as a ladder made out of bread. I thought it had problems shifting POV between Liina and Hans (and occasionally a random third party.) And though it is almost relentlessly gorgeous and full of interesting faces, the underwater long shot of two people under a heavenly spotlight has been employed too much too recently (‘Shape of Water,’ ‘You Were Never Really Here,’ at least one other I’m forgetting from this past year) to not be a distraction.

But there is joy to be had here, I hope more people find that.

(*) As much as there may be filmic nods, a folkloric world implies primal sources. So much of this was comfortably near-familiar/Grimm-adjacent, but I was unable to see the march of the dead as anything but the fox wedding in Kurosawa’s ‘Dreams’ (or if you prefer, Shiina Ringo’s "Irohanihoheto" video.) But that’s me. Forests are in-between places where these things take place. The portrayal of the devil also seemed Japanese-inspired to me, but who knows?

(**) Those kratts! Some combination of a golem and the broom from “The Sorcerer’s Apprentice” and an abandoned toolshed, but with so much personality!
Top 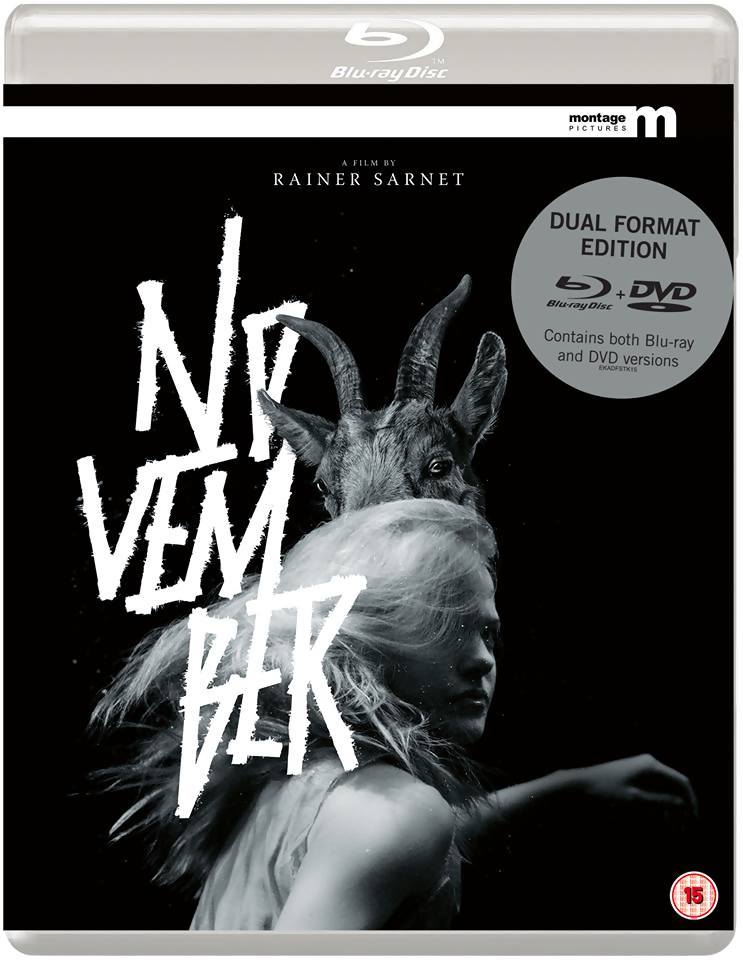 Eureka wisely went with the superb poster art here, unlike Oscilloscope’s bizarre decision not to
Top

Hmmm... have all the supplemental materials for the Eureka/Montage release been announced yet? It currently has nothing but a booklet. I tend to assume a superior release from Eureka, but it looks like the Montage has been lapped by the Oscilloscope here. I’ll likely cancel my Montage order.

* 1080p presentation on Blu-ray, with a progressive encode on the DVD
* Uncompressed LPCM 2.0 audio (on Blu-ray)
*Optional English subtitles
* Trailer
* PLUS: A collector s booklet featuring a new essay by film critic and writer Alexandra Heller-Nicholas

DeprongMori wrote: ↑
Fri Mar 08, 2019 12:44 am
Hmmm... have all the supplemental materials for the Eureka/Montage release been announced yet? It currently has nothing but a booklet. I tend to assume a superior release from Eureka, but it looks like the Montage has been lapped by the Oscilloscope here. I’ll likely cancel my Montage order.

* 1080p presentation on Blu-ray, with a progressive encode on the DVD
* Uncompressed LPCM 2.0 audio (on Blu-ray)
*Optional English subtitles
* Trailer
* PLUS: A collector s booklet featuring a new essay by film critic and writer Alexandra Heller-Nicholas

Return to “Masters of Cinema Rumours and News”