An American Werewolf in London

Discuss DVDs and Blu-rays released from Arrow and the films on them.
Forum rules
Post Reply
30 posts
Message
Author

An American Werewolf in London 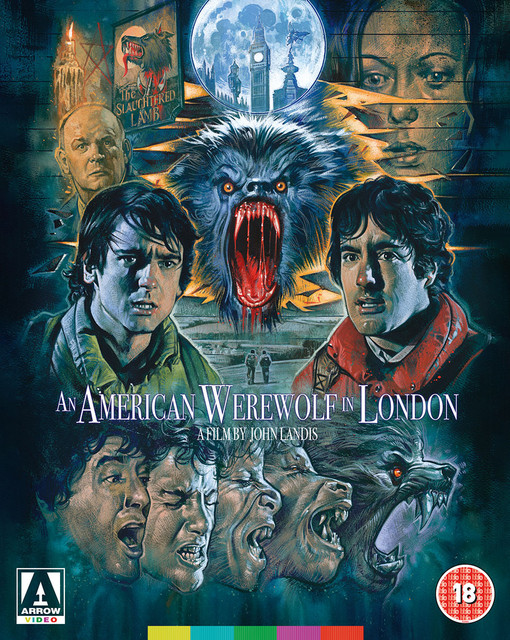 One of the greatest directors of the 1980s, John Landis (The Blues Brothers, Trading Places), expertly combines macabre horror with dark humour in the lycanthropic classic, An American Werewolf in London.

American tourists David (David Naughton) and Jack (Griffin Dunne) are savaged by an unidentified vicious animal whilst hiking on the Yorkshire Moors. David awakes in a London hospital to find his friend dead and his life in disarray. Retiring to the home of a beautiful nurse (Jenny Agutter, Walkabout) to recuperate, he soon experiences disturbing changes to his mind and body, undergoing a full-moon transformation that will unleash terror on the streets of the capital...

An American Werewolf in London had audiences howling with laughter and recoiling in terror upon its cinema release. Landis’ film has gone on to become one of the most important horror films of its decade, rightly lauded for its masterful set-pieces, uniquely unsettling atmosphere and Rick Bakers’ truly ground-breaking, Oscar-winning special makeup effects. Now restored in 4K, and presented with an abundance of extra features, this big beast of horror can be devoured as never before...

Yes, looks like a great set with lots of new Landis-related material. It is, however, too bad that cover couldn’t fit another twenty floating images
Top

The extras do seem to cover this from every imaginable angle which is nice to have.
Top

domino harvey wrote:Yes, looks like a great set with lots of new Landis-related material. It is, however, too bad that cover couldn’t fit another twenty floating images

Humphreys relies way goo much on this floating heads gimmick. The Man of thousand faces and many others use this and it is indeed not only tirew and tiring but also rarely very inspired.
Top

This is one of those no-brainers for Arrow Video, almost begging the question "why haven't they already released this?". An immediate pre-order from me, nevertheless!

Now I hope they can do an all-singing, all-dancing edition of The Blues Brothers too...
Top

This has currently two listings on amazon.co.uk - one at 24.38, one at 14.99, and both appear to be the Arrow blu-ray sold by Amazon. Does anyone understand the difference?
Top

The cheaper one is the disc only standard edition. The more expensive one is the limited edition with booklet, slipbox and other bits of paper.
Top

Chris : I'm surprised by your review mentioning it's a completely different restoration made by Arrow, rather than just the Universal recent one but not filtered. Are you able to post here the technical details from the booklet ?
Top

tenia wrote: ↑
Mon Oct 28, 2019 1:36 pm
Chris : I'm surprised by your review mentioning it's a completely different restoration made by Arrow, rather than just the Universal recent one but not filtered. Are you able to post here the technical details from the booklet ?

When I get home this evening I can double check for you but I'm positive the notes stated Arrow performed the 4K restoration (though now I'm wondering if I mixed up the notes with another title...)
Top

No problem. I expected Arrow to simply re-use the very recent 4K remaster from Universal, but simply unfiltered, but after Oldboy having been redone only a few years after the previous 4K restoration, everything seems possible !
Top

An American Werewolf in London has been exclusively restored by Arrow Films and is presented in it's original 1.85:1 aspect ratio with mono and 5.1 sound.

The original 35mm camera negative was scanned in 4K resolution at NBC Universal's Studio Post facility. The film was graded and restored in 2K resolution at Silver Salt Restoration, London. The grade was approved by director John Landis.

Working my way through the extras on this and just finished Jon Spira's "I Think He's a Jew" mini-essay. Has anyone seen this yet? A good bit of interesting info and theory there but also some frustrating lack of connective tissue -- particularly what seemed to me like an unexplained leap between the Nazis' historical identification with wolves and the underlying allegory of the film's portrayal of the central Jewish character as a werewolf. Anyone care to enlighten me on what Spira's saying ... or maybe know how to contact Spira?
Top

I forget the exact details, but in one of the old commentaries Landis also talks about this a little mentioning childhood nightmares of Nazi werewolves.
Top

My confusion largely has to do with Spira spending the first half of his essay focusing on the well documented Nazi identification with wolves (Operation Werewolf, the Werewolf novel, wolf packs, ol' Adolph even calling himself a wolf on occasion) and then seeming to abandon that whole line of thought and switching to a fairly interesting analysis of AAWIL as a shining example of the werewolf being an "intrinsically Jewish beast" (or something along those lines). It seems like the essay should have offered some sort of theoretical connection between the notion of Nazi werewolves and Jewish werewolves, but if it's there I missed it.
Top

I suggested to producer James Blackford that Jon do the visual essay based on an article he wrote for the BFI website a few years ago, which you can read here. It doesn't clarify Telstar's query above, as the original article is more rooted in his personal discovery of the film, but you might enjoy reading it if you already got something out of the video essay version.
Top

I'm afraid I have not gotten to the extra feature yet, but I wonder if Spira mentions the Brian Glover connection in the sense that he's one of the local yokels in the pub that our two backpackers stumble into at the beginning of the film, and a decade later he was the non-Jewish sperm donor father in mix up comedy Leon The Pig Farmer (that was weirdly the trendy year of sperm donor mix-up films, since there was also that Whoopi Goldberg and Ted Danson film Made In America too!)

Really I think its less about Jewishness per se (though its there with that one line by the nurse, and the Nazi killers invading the family home and machine gunning everyone nightmare lends pretty specific fuel to the argument that a sense of historical horror is inflecting and mingling with our main character's thoughts about his current predicament) but about clashing cultures in general. We get our American fishes out of water in a foreign country, both classically in the broadly caricatured pub scene but also still when one of them returns back to the big city too. so the specifically Jewish circumcision comment gets quickly re-framed into a more general one by the more worldly wise and informed (whether through study or practice!) nurse.

But (and this is what makes the film so surprisingly astute) the film feels to be just as much about the difficult vagaries of the British class system too (perhaps most explicitly put across in the dedication of the film to the then upcoming wedding of Prince Charles and Diana, which was something played up by the tabloids as a 'love across class boundaries' in some ways). You get the 'country bumpkin' locals tied into tradition and acting with suspicion to any outsider to their small village community, whilst back in London there is a rather broad spread of victims from the rather callous besuited City banker type to the somewhat posh and perky 'up and coming' young middle class couple for whom being ripped apart by a werewolf is just yet another one of those annoying distractions from moving on up that property ladder. Plus our American tourists getting caught up in things by accident when they unwisely venture outside of just visiting the standard and safe attractions of Buckingham Palace and the like!

This is a speculative viewpoint on the situation, and probably a controversial one so take it with an extremely large pinch of salt, but in some ways it feels that in the UK 'Jewishness' has been tied to the more urban areas (London and Manchester particularly. As with many minorities it needs a certain infrastructure of places to worship and which offer specifically prepared foods to exist and in order to function properly as a community) and a certain middle class aspirational quality (hence the current suspicion of Jeremy Corbyn and suddenly anti-semitism seeming to be everywhere in the 'newly Socialist' Labour party now that he is running it when it apparently had not existed before), so it feels deeply tied in with a certain upper-middle class lifestyle. One that has only been thrown into starker relief in recent years with Brexit having seemingly come from the more working class areas of the country and therefore sometimes being portrayed as a betrayal of the aspirational middle class (of whatever denomination) in big cities, particularly London. What might be acceptable confined to roaming the desolate Yorkshire moors preying on the locals debating it in local pubs over a pint and a game of darts is rather less tolerable when its lumbering in plain sight right through Piccadilly Circus causing unnecessary rush hour traffic jams before eating its way through fellow tourists and other 'important people'!

(Which is why I feel that the relatively underplayed class tension aspects may be intended to interestingly contrast against the wonderful overall blunt explicitness of the film's quick bursts of intense violence and drawn out, well lit werewolf transformation effects too, cutting through those more implied but unutterable in polite company structuring class themes that are potentially bubbling under the surface with regular gouts of unavoidable 'in your face' gore! Or nudity in the "See You Next *Wednesday*" porno theatre scene, showing a film that I could only imagine would only be possible to exhibit in some of the more seedier London cinemas of the time rather than anywhere else in the country!)
Last edited by colinr0380 on Thu Nov 07, 2019 6:27 am, edited 5 times in total.
Top

Ah, so that's what that phrase had been alluding to all these years!
Top

Calling someone a Tuesday is the best offhand, disparaging remark.
Top

Anybody else watched Mark of The Beast: The Legacy of the Universal Werewolf and noticed several out of focus shots of the talking heads? I'm surprised something like that would be permitted. Day one of my camera training back in my Community Television days emphasized staying in focus.
Top
Post Reply
30 posts