From a Letterboxd review of American Honey (great film, by the way):


Meanwhile, around her, the white kids sing along to rap music and use AAVE at times, oblivious to the implications of cultural appropriation (why would they be otherwise, of course, they aren't amateur film critics...). ... Do you, libertarian, see virtue here? Do you, socialist, find this lack of agency in the illusorily free working class offensive? Do you, liberal, feel your heart bleed? Do you, conservative, dismiss this as distortion and melodrama? Do you queer children notice the queerness here (are they making out by that bonfire? Did I see that right?)? Do you feminists recoil at the treatment the girls receive yet applaud the film for not flinching from showing it? Do you non-feminists not even notice the way the boys subtly harass, the way Jake crosses the line, the way the camera treats that one moment between him and Krystal (so grossly filmed, so directly filmed, so unnerving)? ... I see in this the soul-eater that is capitalism and its weapons patriarchy and white supremacy.

I get that different people have different interpretations, but I really don't think Andrea Arnold was going for that.


colinr0380 wrote: ↑
Tue Jul 23, 2019 3:47 pm
It has been a while since I last saw it back in my early teens but I remember liking Critters 3, mostly because I love claustrophobic 'trapped in a building' films.

Not to stray too far off topic here, but do you have any recommendations? If you haven’t seen them, The Stanford Prison Experiment and The Invitation are good "locked-door" thrillers.
Top

Ira's tweets usually amount to a mixture of avoidance and sass because he really doesn't have much to contribute past telling someone to "Keep it."
Top

colinr0380 wrote: ↑
Tue Jul 23, 2019 3:47 pm
It has been a while since I last saw it back in my early teens but I remember liking Critters 3, mostly because I love claustrophobic 'trapped in a building' films.

Not to stray too far off topic here, but do you have any recommendations? If you haven’t seen them, The Stanford Prison Experiment and The Invitation are good "locked-door" thrillers.

A lot would be the standard ones such as of course Die Hard, but for a more obscure recommendation there was a great TV movie that came out in the wake of that: Trapped with Kathleen Quinlan (and directed by Fred Walton of When A Stranger Calls), where she plays an overworked executive trapped in a giant office building with a serial killer and having to play cat and mouse games throughout every single part of the building during one night, from penthouse to parking garage; from the floor that is under construction to dangling off the side of the building. It belies its TV movie origins really well and I'd love it if it got a disc release some time. It bears a bit of comparison to that recent film P2, especially in the car chase around the parking garage climax, but Trapped is a bit less skeezy (Quinlan never falls into the hands of her tormentor, for one thing) and more expansive and wide ranging throughout that building.

The other one is the Dean Koontz adaptation The Face of Fear, with Pam Dawber, though it is a bit wackier as the imbd plot description suggests:

imdb wrote:A killer traps an unarmed police detective and her husband, a former mountaineer with psychic powers, in a Manhattan office building.

Of course the mountaineering skills come in handy for an escape attempt from the building!

And whilst its not in a building per se, the best 'escape room' film is still probably Vincenzo Natali's Cube!
Top

In response to that, came this: 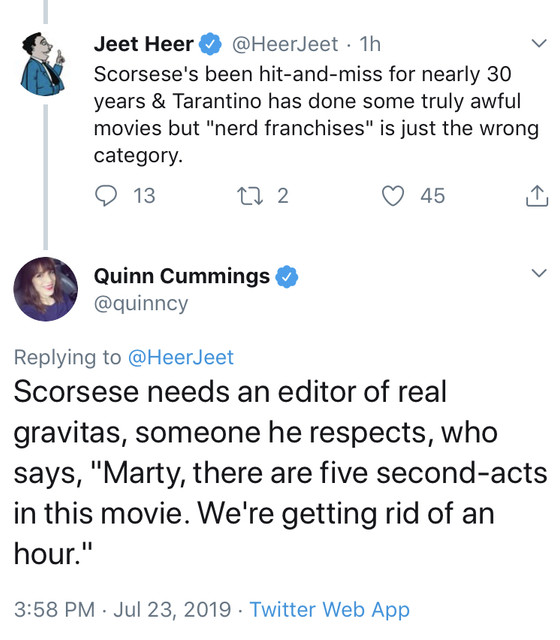 The Internet was a mistake
Top

As I get older, the one vein of film criticism that I have less patience with than any other is this Film School 101 approach where films are doing something wrong if they're not rigidly structured in a particular way. The merits of Schoonmaker's contributions aside, "it has five second acts" just sounds like such a conformist line of criticism.
Top

And most of those people seem to think the three-act play’s the only dramatic structure in existence.
Top

I lived to see the grown-up version of that child from The Goodbye Girl indirectly bash Thelma Schoonmaker on social media.
Top

Mr. Sausage: Exactly. It’s just something they read in a screenwriting guide or secondhand from some other hack critics and now talk that way because it makes them sound smart.

All that said, Scorsese’s movies seem pretty conventionally structured to me, so the criticism seems especially bizarre in this case. But CASINO was long so I guess he doesn’t know how to tell stories.
Top

Neither Scorsese nor Tarantino is particularly to my taste but the internet handwringing about them today is so annoying that it makes we wish like mad I was a huge fan of both, just to avoid any association with all the incompetent point-scoring and hot takes.
Top

Were you thinking of this, by any chance?

Basically a glorified rap sheet (as if we hadn't already heard about all these things ad nauseam) with some curious inclusions: one supposed outrage perpetrated by the director referenced in the article includes the scene in Pulp Fiction in which Uma Thurman gets "stabbed" by a hypodermic needle in an attempt to save her from an overdose. If the writer thinks that qualifies as an instance of cinematic violence against women, I hope he never visits an actual hospital.


(Though it’s fair to say male characters were also subjected to extreme violence.)

All of this culminates in an admission that the writer has no idea what's in this film, but with a question as to whether it's really worth bothering to find out. Well, I dunno. Is it? Maybe you can make that choice for yourself and spare us your thinking out loud about it?


The question now is: is it time to cancel Quentin Tarantino?

I think the real question is whether it's time to cancel your Guardian subscription.

(I know it's shooting fish in a barrel to make fun of "comment is free" pieces in The Guardian. But where do they find these utterly pointless, piss-weak provocations?)

I'll say one thing for Twitter: shit discourse, but the thorough roasting the writer is receiving here is at least some salve for the wound of reading the piece. Even if they're QT fanboys, they're on the side of the angels for once here.

Shit got downright juicy when someone posted this image of the actual body count in his films up till Django Unchained. 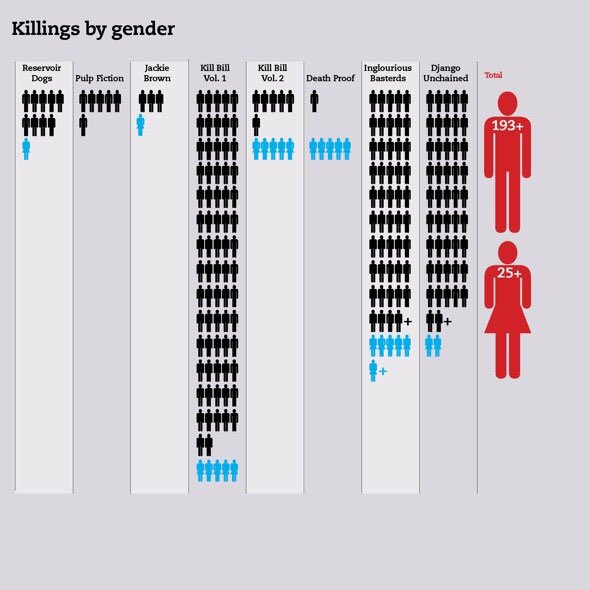 Mia Wallace was given a life saving adrenaline shot. Which this person calls abuse? Okay.

"Respect a woman's right to die from an accidental drug overdose." ~ No woman ever
Top

I was considering linking to that Guardian piece but it was too awful to merit and discussion. I never thought the Guardian would let something like this in, but then again I rarely ever read the Guardian so...
How did all this Socraese shit get started? I can understand Tarantino getting some heat right now, but why Marty?
Top

Mr Sausage wrote: ↑
Tue Jul 23, 2019 8:06 pm
And most of those people seem to think the three-act play’s the only dramatic structure in existence.

But give them this, and they'll say "oh, but that's just another 3-act play, how unoriginal !"
Top

dda1996a wrote: ↑
Wed Jul 24, 2019 3:41 am
I was considering linking to that Guardian piece but it was too awful to merit and discussion. I never thought the Guardian would let something like this in, but then again I rarely ever read the Guardian so...
How did all this Socraese shit get started? I can understand Tarantino getting some heat right now, but why Marty?

DiCaprio connection, which lead to Ira shade of the two filmmakers. Even more amusingly was one of the comments in the thread said Marty was the Ace of Base of film, just repeating the same beats all the time. The director who's made Alice Doesn't Live Here Anymore, King of Comedy, New York New York and Silence. It's as if they are still stuck on Scorsese only doing gangster pictures with Gimme Shelter in the soundtrack.

This gem was deleted last night, ironic coming from a Michael Mann fan.

And that gets dozens of likes.

The deletion was a good move. Apologizing for trivial things is worse than any ridiculous review.
Top

waste of a movie. things happen and that's it

A contemporary review of L'Avventura?
Top

By those standards, Nosferatu looks like a 1922 version of EastEnders.
Top

I hadn’t seen what he was faux-apologizing for until Glenn Kenny retweeted someone who had a screenshot: 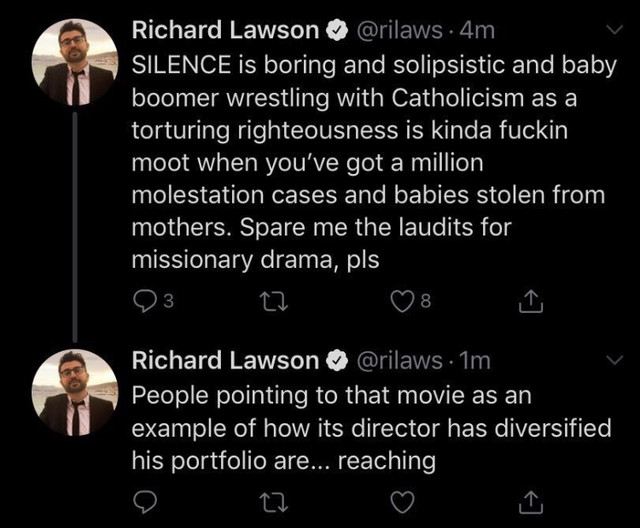 I mean it's one thing to criticize the Catholic Church as an institution but I'm unsure what that has to do with the film proper? If you're a really brave and inquisitive soul though you can go to Richard's Twitter account and read about his juul habit which provided me more entertainment than his drive by comments about films.
Top

“Verified Amazon Customer” would like you all to know this about the Better Off Dead Blu-ray: