By the notorious Armond White.

All things considered, that's not as scathing as I'd expect. But:

No, not at all. But the scene where the actress whispers in Dalton’s ear came right before or after the one where Cliff picks up the underage hippie - I did think Tarantino was associating two forms of “precocity”, an eagerness to be recognized by adults, a presumption of equal standing.

And I think the “child star” phenomenon might be inherently “problematic” - it’s not pedophilia, at all, but it’s an unusual relation psychologically.
Top

People out there fighting the good fight: 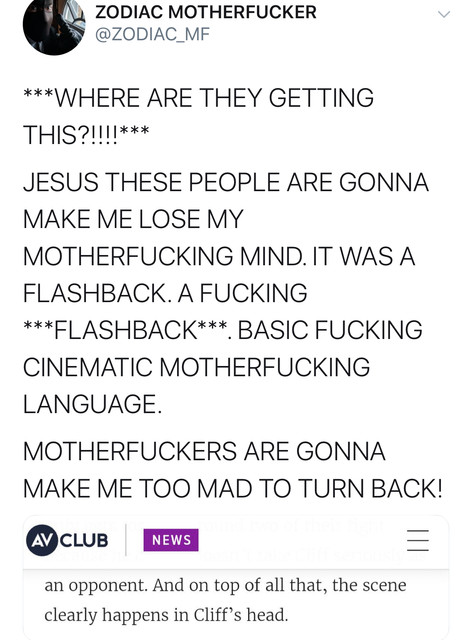 Saw the movie this afternoon but ultimately was disappointed by it. Not by much : it's very well casted (though Pitt and DiCaprio are so good, all the others feel way behind) and has a terrific vibe, but it was hard not to think it's way too long. Characters' psychology, relationships ans atmosphere are all effectively grounded but Tarantino keeps hammering the points again and again and again. Its second half felt better though, but I'd have a hard time saying the first half is bad in any way. It just feels like the movie should be much tighter than it is. The best example to me seems like the Lancer shooting, which is cool but felt excruciatingly overlong considering its usefulness overall.

I also felt the movie to be technically a bit below what I expected. It felt pedestrian too often as for the mise en scène.

It's a shame because it has a tremendous atmosphere, down to its unexpectedly creative but ultimately sad ending. I do wonder what Tarantino expresses behind it though. That we were one badass away to avoid all this ? And what' "this" exactly ? New Hollywood ? Modern world ?

As for the Bruce Lee scene,
SpoilerShow
I take the scene as Cliff imagining what would happen if he went ahead with getting casted on the movie, so not a flashback but a fantasy.
Top

Tenia, it's a flashback to the shooting of the show The Green Hornet some months prior, as evidenced by the clothes that Rick is wearing, and Rick's dialogue explaining why Cliff would likely not get a job on Lancer. It is not a fantasy of what would occur if he did get a job on Lancer - it's an entirely different set and different show - Bruce Lee is not working on Lancer.
Top

Oh, right ! Didn't realise that at all. Thanks for the precision.
Top

It's pretty confusingly presented. I realised it was a flashback but wasn't sure initially and can easily see how people could miss that.
Top

I could have guessed it since I knew Lee didnt work on Lancer, but I'm wondering if I missed from the movie itself that it was a Green Hornet shooting or if you have to guess it.
Top

tenia wrote: ↑
Thu Aug 15, 2019 6:51 am
I could have guessed it since I knew Lee didnt work on Lancer, but I'm wondering if I missed from the movie itself that it was a Green Hornet shooting or if you have to guess it.

It’s not stated explicitly but we know because Bruce Lee is wearing his Green Hornet costume in the scene.
Top

tenia wrote: ↑
Thu Aug 15, 2019 6:51 am
I could have guessed it since I knew Lee didnt work on Lancer, but I'm wondering if I missed from the movie itself that it was a Green Hornet shooting or if you have to guess it.

It’s not stated explicitly but we know because Bruce Lee is wearing his Green Hornet costume in the scene.

Also, the previous scene with Pacino mentions that he was in Green Hornet.
Top

I know Lee was in the Green Hornet, but not having seen the show, I thought Lee's costume was whatever's costume he could have worn, and thought Booth calling him Kato (once, IIRC) was an unspecific nod to Lee's role. I definitely didn't understand it was related to that particular moment.
Top

Lee's daughter has rejected Tarantino's defense of the scene and asked him to "shut up".

I think that scene - fairly innocuous in conception, is going to haunt the film with "controversy".

Also Cahiers gave this 2/5. A rough translation of their blurb - "For Tarantino to imagine his cool nerds saving his fantasy world is okay, but for him to appear to be the savior of American cinema, when he has less and less to say, leaves us more than perplexed."
Top

Lee's insistence that Tarantino's portrayal is somehow an insult is the entire problem here. The idea that someone being confident and even borderline arrogant is some kind of irredeemable character flaw is, itself, incorrect. Some of history's most charismatic and beloved figures fall into that category.

Also, that Cahiers blurb doesn't even make any sense.
Top

Doesn't this also fall squarely into the period of the time between Green Hornet and when Bruce Lee was trying to set up Kung Fu to star in, which eventually after Lee was rejected ended up starring David Carradine? Maybe in this more hopeful universe Bruce Lee never leaves the US to return to Hong Kong to make his films (though that cuts out a significant portion of his fame, if not all of it) and becomes a television star instead? Maybe he doesn't die young and ends up being rediscovered by Tarantino and starring in Kill Bill?

But then what happened to David Carradine then? That's the problem with alternate universes: there are always winners and losers (and sometimes 'losing' turns you into the bigger winner in iconic, gone too soon terms) by swapping fates around, even if we can wistfully dream of what could have beens.
Top

I love Bruce Lee. I had a "Enter The Dragon" poster growing up. Absolutely adored him. I am not an asian or asian-american, but I could empathize with his daughter's point of view in terms of how he his portrayed in the film. However, in the context of the film, which is a literal fairytale, we can establish that this is some sort of flashback/fantasy on Cliff's part. I watched the movie again last night, at the New Bev, and the scene got a huge, positive, reaction. Some of the biggest laughs in the movie come during that scene, certainly the car part. It is so ridiculous and hilarious to see Bruce Lee get "punked".. because he NEVER got punked.. outside of say Chuck Norris in The Big Boss... but Bruce still got him in the end, of course. I compare to, in "real life", that video floating around YouTube of the short white guy that beat Michael Jordan at a corporate 1 on 1 game -- it's just so unfathomable that it's hilarious. I don't think any less of Jordan and realistically we shouldn't think less of Bruce Lee because in a fictionalized movie, a fictional character, got the best of him for one round.

Last night was the second time I watched OUATIH and I must say this film rewards and enriches with repeat viewings. Rick Dalton might be the funniest part Leo has ever played and the most hilarious he's ever been.
Top

mfunk9786 wrote: ↑
Fri Aug 16, 2019 11:20 am
Lee's insistence that Tarantino's portrayal is somehow an insult is the entire problem here. The idea that someone being confident and even borderline arrogant is some kind of irredeemable character flaw is, itself, incorrect. Some of history's most charismatic and beloved figures fall into that category.

I would agree. In the context of their sport or profession, many of the GOATS are cocky. Exhibit A: Cassius Clay. Modern era: LeBron James ... "I am the best basketball player in the world"... etc.
Top

I had to see this disingenuous horseshit so now you have to too: 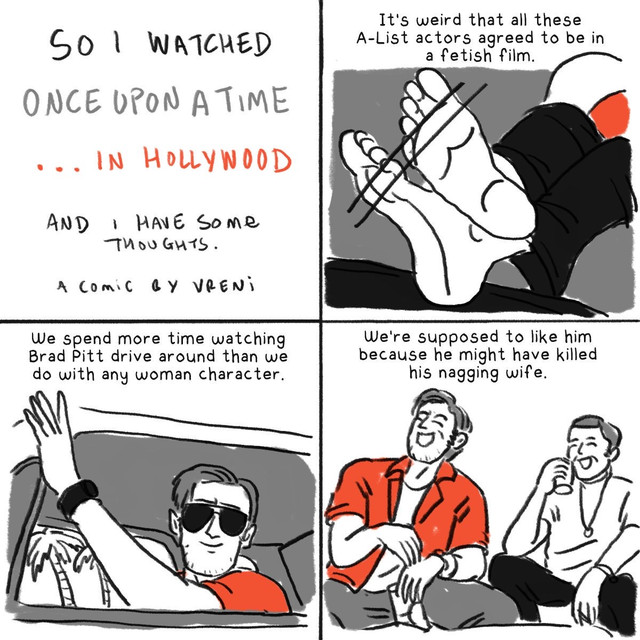 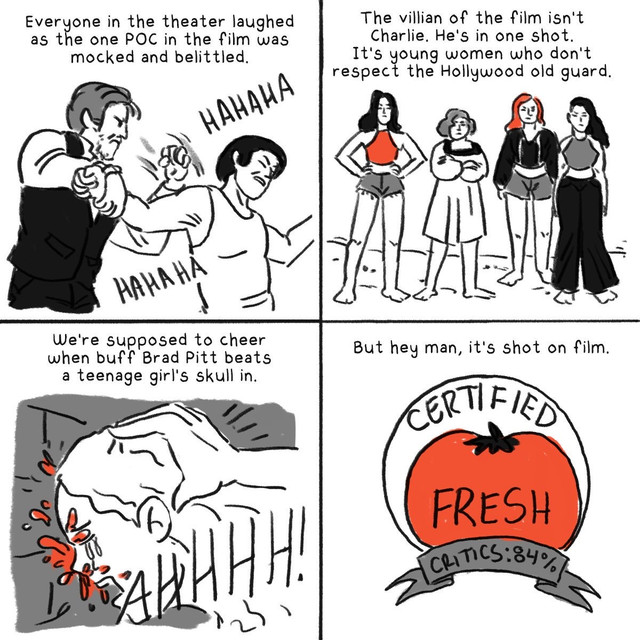 I was pleasantly surprised by the amount of Twitter commenters (most of them not hailing from film Twitter, too) that were pointing out how much the comic sucks to the artist's face
Top

Never Cursed wrote: ↑
Mon Aug 19, 2019 6:44 pm
I was pleasantly surprised by the amount of Twitter commenters (most of them not hailing from film Twitter, too) that were pointing out how much the comic sucks to the artist's face

Surprised? Tarantino stans are not exactly hard to come by on the internet... Nor are people who will "point out" how pretty much anything sucks to its creator's face.
Top

In regards to the spoiler in that image mfunk posted (NSFW description). Apologies for my frustration (Not at mfunk).

SpoilerShow
Google the images of the Tate murders. Look at what Susan Atkins, Patricia Krenwinkel, and Charles Watson did to Sharon Tate and and everyone there. Wojciech Frykowski was stabbed over fifty times and was shot twice. Jay Sebring was hung by his neck and then shot and stabbed to death. Abigail Folger was chased from the house and stabbed twenty eight times. Steven Parent was shot multiple times in his car. Oh and let's not forget that Sharon was eight and a half months pregnant.

To see someone attempt to try and convince me there's a "both sides" argument to this specific aspect of the film strikes me as peak nonsense. No doubt the individual who made this comic would not apply the same reasoning to say the Sociopathic Nazis who allowed a woman to be murdered at Charlottesville. Yes it's absolutely revisionism but I'll be damned before I'll take someone seriously if they tell me that preventing those murders in any would be unjustifiable.

Am I overreacting? Am I being an ass here?
Baffling. Baffling.
Top

I like how he only responds to the people that agree with him. Everyone else pointing out the severe flaws in his logic are oddly ignored. I'm sure it's an accident.
Top
Post Reply
1011 posts