The entire board of the Cesars will resign after this year’s ceremony after hundreds of French industry members pen an open letter complaining of lack of representation and transparency, buoyed not by the Polanski noms (which is what US write ups are focusing on because they are a dog with a bone, though they are not the issue at hand) but by the head of the Cesars refusing to allow an invite extended by an honoree to Claire Denis for an official dinner last month 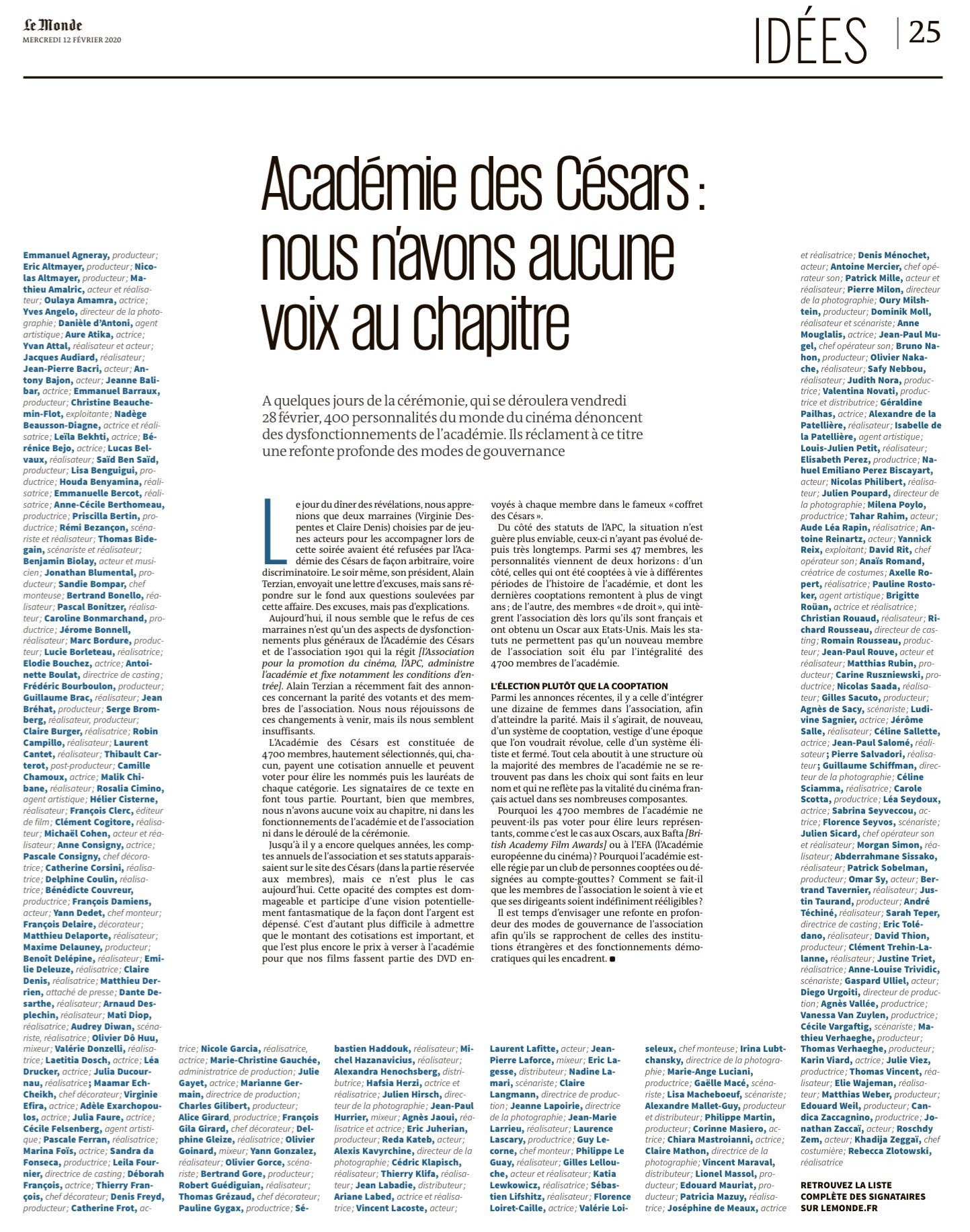 For those who don’t recognize these names, picture 95% of the actors and filmmakers nominated at the Oscars in the last twenty years penning an open letter together
Top

Claire Denis AND Virginie Despentes.
The Polanski noms aren't helping and are part of the issues, though.
Top

It's strange that there doesn't seem to be an English translation floating around though, which makes me a bit skeptical on the mood of the piece when all the U.S. articles are citing one-liner pullquotes in English, as if perhaps they are just looking at the translated spaces around Polanski's name?
Top

The basic issues behind the whole comittee collectively quitting is a long French story about how Terzian had been handling the Academy for almost 20 years and how the accumulation of issues (both internal and more contextual) just became too much.

I'm not sure most foreigners would be able to navigate through it easily, so I guess it's easier to focus on the Polanski noms to sum up how foreign to our current societal changes the Academy seemed to be.
Top

Is this piece then just another example of journalism that is ignorant at best and deceitful at worst? (Since we have a lot of that in the US anyways these days.)

This piece literally says that "the mass resignation of the 21 members of the Association for the Promotion of Cinema is over Roman Polanski's movie An Officer and A Spy leading the nominations this year". Though you seem to be saying the issue is more deep-rooted than this single film.

And the academy itself voted for this film in various categories, right? So the protest cannot be over this film?

FWIW, I find the Cesars generally seem to represent decent taste. I am struck by the major nominations for films like Slack Bay and Stranger by the Lake which wouldn't have a chance in hell at the Oscars.
Top

From what I understood in France, and this understanding seems shared on various dedicated boards, yes, Polanski noms are only a secondary part of the various issues that led to the resign. The main one is Terzian's authoritarian attitude within the Academy.
Top
Post Reply
881 posts