Discuss DVDs and Blu-rays released by Criterion and the films on them. If it's got a spine number, it's in here. Threads may contain spoilers.
Post Reply
20 posts • Page 1 of 1
Message
Author 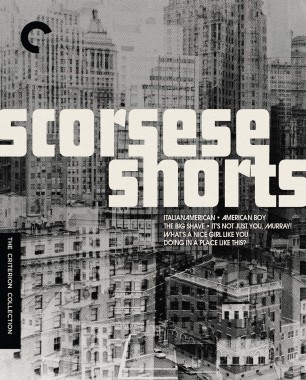 This compilation of five early short films by Martin Scorsese offers a fascinating window onto his artistic development. Spanning the years from Scorsese's time at NYU in the mid-1960s to the late '70s, when he was emerging as one of the era's most electrifying talents, Scorsese Shorts centers on the intimate home movie Italianamerican—a loving snapshot of the director's parents—and American Boy, a freewheeling portrait of a larger-than-life raconteur. Also included are The Big Shave, a daringly visceral response to America's involvement in Vietnam, and the bracing student films What's a Nice Girl Like You Doing in a Place Like This? and It's Not Just You, Murray! Touching on many of Scorsese's key themes—Italian American identity, family, his beloved New York City—these are hilarious, candid, and illuminating works from the preeminent American filmmaker of our time.

Would love to get this but I doubt the U.K branch would release a collection of Docs and Shorts despite the name brand.
Top

I've only seen Italianamerican which I didn't really care for, but I'm curious about the student films
Top

I'll second Swo. The other films are fairly generic student films, but that ones a fairly crazy monologue only one upped for why it got made.
Top

I think the student films have their own merit too. 99% of the student films I see are terrible, even by filmmakers I love. But It's Not Just You, Murray! is the best student film I've seen. It really shows Scorsese play into his cinephila by digging into the history of cinema and using every technique he can pull out of his hat twenty-five years before he did it in Goodfellas. What's a Nice Girl also feels close to what the real Scorsese is like. Although he tends to make films with very masculine, often violent protagonists, this feels closer to the anxious, neurotic, New Yorker he really is.
Top

All this is heartening enthusiasm - I'm excited to see American Boy though I'm hoping the "More" or conversation with Farran Smith Nehme goes into the details of whatever the story behind it is, as you are alluding to knives and has me curious
Top

In short the film was made so that it would be easier for Scorsese to get coke. An engaging speaker could make it into a great story on its own.
Top

Well that makes a lot of sense and I should have put two and two together, though I highly doubt we'll get a supplement on that even with Scorsese being quite open about his substance use history
Top

Why is American Boy not found on the MS Director section on IMDB?

I realize IMDB can be incomplete but this is Scorsese.
Top

It's there, between Last Waltz and Raging Bull
Top

Wow, I never thought this would ever actually materialize. I haven't seen American Boy in at least 15+ years when I rented the VHS (which I think was recorded from a tv broadcast) from the St. Mark's Kim's. Scorsese never talks about it, at least not in the handful of books of interviews I've read, and I feared he might've disowned it. I knew Prince was cast in his part in Taxi Driver because he was Scorsese's dealer but I didn't know American Boy was made as some sort of attempt (if that's the correct word) to procure coke more easily, which I'm guessing means it was made in exchange for Prince delivering to Scorsese when he was out of town or in LA, or that the film was intended as payment in advance for future accommodations or maybe made specifically to settle a debt. I don't know much about Scorsese's personal life during the mid to late 70s and all I've ever read of his drug problem starts and ends with him landing in the hospital after overdosing and being visited by DeNiro, who came to pitch him Raging Bull. I'd be fascinated to hear in more detail about his day to day existence during this period, how cocaine affected his work and relationships and/or how long he was actively using but I'm not holding out much hope for that. Italianamerican struck me as a film made by someone a little too close to his subjects. It's fine but iirc his parents aren't especially interesting and their son isn't about to rake them over the coals in any event but I haven't seen it in years and years either. I'm not familiar with any of his shorts and although I wish Criterion could've found a way to include the Michael Jackson music video, this is still a release I'm very much looking forward to.
Top

I (sadly?) don't have any info regarding Scorsese's drug habits, but in regards to Italianamerican, while it's absolutely true it's obviously made by someone close to his subjects, I disagree about their interest level: I watched it for the first time last November and adored it. It's nice and sweet and short, and maybe I respond well to the temperament of Scorsese's parents, being of Italian descent myself, but they crack me up, and the stories and details they share are great pleasures from an anthropological point of view, and Scorsese's smart enough to not try to do anything too formally tricky with it. And the recipe in the end credits––a wonderful final touch!
Top

barryconvex wrote: ↑
Sat Feb 15, 2020 2:56 am
I'd be fascinated to hear in more detail about his day to day existence during this period, how cocaine affected his work and relationships and/or how long he was actively using but I'm not holding out much hope for that.

Yeah this film came out right around his rock bottom and I'm sure it isn't a warm memory. As far as I'm concerned, aside from Scorsese's open comments about his addiction with an understandable restraint (I believe he and Ebert have gone into it a bit in various documented conversations, as friends with that commonality of addiction history), he's tackled his own awareness of the common denominators through his work while indirectly using his own experience enough so to make up for that blind spot of details in his personal life. The Wolf of Wall Street's blend of humor and horror in many scenes, but especially that 'ludes crawl to the car one, hit that sweet spot of objective and subjective agony, destruction, and absurdity, while validating the escapist, compulsive, elevating, and even fun elements. I can't think of many filmmakers who have chosen such a complicated and creative way to approach the subject when there's a clear personal relationship there.
Top

If you want a glance at the shorts, clips of Italianamerican and The Big Shave turn up in Scorsese's Scene By Scene interview with Mark Cousins from the late 90s.
Top

italianamerican, at least, can be seen in full on youtube.
Top

I remember borrowing a double feature of ItalianAmerican and The Big Shave on VHS from the library. It was released by Home Vision/Janus Films.

I first heard about American Boy shortly after I saw Pulp Fiction and read about the injection in the heart scene.
Top

I can't think of many filmmakers who have chosen such a complicated and creative way to approach the subject when there's a clear personal relationship there.

I can't think of any off the top of my head. I would think he finds it therapeutic on some level, to examine his own issues with drugs through the eyes of his characters.
Top

Perhaps, though of all the filmmakers who tackle substance use, he seems to be the least therapeutic. I don’t believe he identifies as a person in recovery, not that that necessarily matters but Scorsese strikes me as someone who has worked through his own issues with substances and yet is more interested in exploring the idea of perspective. He’s spoken a lot about using objective and subjective camerawork to convey this idea and I think as someone who lived in that deeply subjective destructive space unaware of the consequences of his actions, playing with that subjectivity/objectivity around that topic is a perfect fit for him because the disease of addiction includes such processes that he knows only too well, plus on a less personal level they are a great subject to express his broader interest in the medium and perspective, by way of his prime interest of spirituality- which while seemingly unrelated is absolutely the guiding principle for his obsession with the spectrum of perspective.
Top

Italianamerican and American Boy were presented on TCM a few years ago with a lengthy Scorsese intro that I absolutely cannot remember a single second of, so a new interview seems about right (edit: it's on YT in front of American Boy).

And I feel like the last word re: Scorsese's coke years were adequately addressed via Goodfellas' Henry's-last-day-as-a-wiseguy sequence, but I am probably alone with that sentiment.

This set was in the pipeline for what feels like too many years, so I'm glad it's finally happening, especially for American Boy.
Top
Post Reply
20 posts • Page 1 of 1