Discuss DVDs and Blu-rays released by Criterion and the films on them. If it's got a spine number, it's in here. Threads may contain spoilers.
Post Reply
43 posts
Message
Author 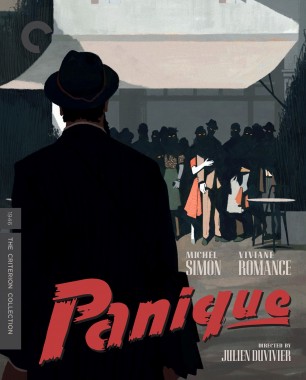 Proud, eccentric, and antisocial, Monsieur Hire (Michel Simon) has always kept to himself. But after a woman turns up dead in the Paris suburb where he lives, he feels drawn to a pretty young newcomer to town (Viviane Romance), discovers that his neighbors are only too ready to be suspicious of him, and is framed for the murder. Based on a novel by Georges Simenon, Julien Duvivier's first film after his return to France from Hollywood finds the acclaimed poetic realist applying his consummate craft to darker, moodier ends. Propelled by its two deeply nuanced lead performances, the tensely noirish Panique exposes the dangers of the knives-out mob mentality, delivering as well a pointed allegory of the behavior of Duvivier's countrymen during the war.

The subtitling feature on this looks like it'll be fascinating. I wonder if it's the same piece Goldstein used in his lecture series last year. Did anyone here attend?
Top

Is this the first Rialto distributed title Criterion has released in years? I thought that relationship was dead after we never saw Le Petit Soldat released by Criterion following the restoration of that film.
Top

I caught the restoration of this last year and really enjoyed it as a pitch-black critique of French Vichyism; the last 20 minutes are among the darkest I've ever seen in a noir. Very excited for this and grateful Criterion is giving it the physical release it deserves.
Top

I was only thinking the other day when is 'Panique going to come out?'. I've only ever viewed it on poor quality bootleg and loved it, so I can't wait to revisit in pristine condition.
Top

This is welcomed news as Rialto has a bunch of French and Italian titles that have under gone restorations. Hopefully, this is just the beginning.
Top

Rialto has always had a good relationship with Criterion. The reason we haven't had any releases from them is that they are the main theatrical distributor for StudioCanal and most of the films in their library are therefore inaccessible to Criterion by no fault of their own.
Top

Not a huge fan of film-noir but I'm always down for examinations of the mob mentality. It's a very fascinating subject (to me, at least).
Top

If that's the case, I can almost guarantee you'll find this compelling, Boosmahn.
Top

That’s what I thought as well, jdw5275. Many of these recent Rialto films that I’ve seen screened at the Film Forum (including this one) have no connection to Studio Canal.
Top

Love the sound of this one. Will definitely have to pick it up.
Top

I'm only familiar with this material from the 1989 version by Patrice Leconte but remember finding it quite devastating at the time, even taken out of its post-war context, so I'm very curious to see this! (I also think that Richard Ayoade film of a few years back, The Double, took a few pointers from it)
Top

Colin, maybe/hopefully this will goose Kino into upgrading Monsieur Hire!

If the subtitling extra doesn't quote this forum's revolt against the original La haine "Snoopy" subs, I say we riot
Top

Only problem here is the transfer from Gaumont and fucking Eclair (which I assume is this one) which was graded while the scanner at Eclair was on one of its "uncalibrated" moods. So the image is clean and sharp, etc but very dull and with incredibly restricted dynmaic range - no true blacks or whites. This was one of several simialrly compromised 2Ks that came out of that period, like L'Ascensure pour L'Echafaud and for Pathe, a very disappointing 2K of Duviv's terrific 1936 Un Carnet de Bal. THey all look totally gray and gray and gray. THey all needed to be done again from scan upwards. Can Criterion dodge a bullet on this or will they go down the Madame de path?
Top

They did pretty well with the Malle I thought so maybe this can also be fixed.
Top

BTW, according to Cannes Classics 2015 page, the film is "presented by TF1 DA. As the original negative has disappeared, a 2K restoration from the nitrate intermediate film print done at Digimage." No Gaumont or Eclair.
Top

I reviewed the French BD release and I dont recall it being problematic. It might have slightly elevated blacks but it isnt Un carnet de bal as far as I recall.

Also, Ascenseur pour l'échafaud most likely as a specific encoding issue on its French BD.
Top

colinr0380 wrote: ↑
Mon Sep 17, 2018 7:05 pm
I'm only familiar with this material from the 1989 version by Patrice Leconte but remember finding it quite devastating at the time, even taken out of its post-war context, so I'm very curious to see this! (I also think that Richard Ayoade film of a few years back, The Double, took a few pointers from it)

This also makes for a fascinating comparison with Simon in Panique a far more bullish and confrontational character than Blanc's creepy and nebbishy M.Hire .
Top

tenia wrote: ↑
Tue Sep 18, 2018 1:42 am
I reviewed the French BD release and I dont recall it being problematic. It might have slightly elevated blacks but it isnt Un carnet de bal as far as I recall.

Also, Ascenseur pour l'échafaud most likely as a specific encoding issue on its French BD.

Remy, I shall have another look at it. I recallbeing very disappointed. The grayscale looked completely flattened.
Top

It might something inbetween, a bit washed out but not à la Echaffaud.
In any case, here are the review I wrote at the time, with screencaps and it doesn't look much washed out, though it looks quite dark.
Top

NABOB OF NOWHERE wrote: ↑
Tue Sep 18, 2018 2:43 am
This also makes for a fascinating comparison with Simon in Panique a far more bullish and confrontational character than Blanc's creepy and nebbishy M.Hire .

That does seem like it will weight the material quite differently (I kind of think of Michel Simon as close to Charles Laughton in performance-type terms!). It also seems interesting that Michel Simon did both this and La Chienne, as (at least based on my memories of how the 1989 version of the material plays out) I could kind of imagine the same story reaching a similar conclusion before it veers into something else!
Top

Unexpected (for me anyway) choice and looking forward to my first viewing of this film.
Top

I have to post this url to my FB page as I have lost the ability to upload images, again.

I concur Remy this is definitely TFI. I think this is eminently solvable with work from Criterion.
Top

Watched my copy of this and didn't care much for it. I thought the film's portrayal of mob violence was ludicrous and too tied to its symbolic post-war meaning. I easily can believe in a world in which the majority of a town could turn on Simon's character. I don't buy a version of the world where literally every occupant of a town, major or minor, does so, and in such a broad, near-farcical fashion (the butcher bribing a young girl to unambiguously lie about molestation in front of others is truly a low point in the film-- I get this is representative of the perceived hypocrisy, but on what plane of existence does this scene play out in the open air of a butcher shop with a half-dozen witnesses who are totes A-OK with it? Gimme a breaksville). Even the most small-minded, self-serving French towns produced Resistance fighters during Occupation... Honestly, I think Lang's Fury is the only mob mentality movie I've seen that registers as plausible, which is probably why it endures so well. Maybe/hopefully I'll like the remake more when I get to it in my Cesar Awards rounds
Top
Post Reply
43 posts