Tommy Lee Jones has joined as co-lead, and here's a synopsis from Deadline:

In Ad Astra (which means “to the stars” in Latin), Pitt would play the slightly autistic space engineer Roy McBride. Twenty years after his father left on a one-way mission to Neptune in order to find signs of extra-terrestrial intelligence, McBride travels through the solar system to find him and understand why his mission failed.

When I saw Gray do a Q&A he mentioned his main operating interest in this was to do the most scientifically accurate sci-fi film ever.
Top

As someone on the Autism Spectrum I get a chuckle out the term "slightly autistic". I imagine he'll be closer to the "quirky but functional" type usually portrayed by the media (The other being the autistic individual who is portrayed as being completely incapable of doing anything). In short he'll be very smart but gosh darn it he can't handle those social skills!

I'm in no way mad and am quite interested to see what Pitt can do with the material. But "scientifically accurate" makes me chuckle.
Top

what does "slightly autistic" supposed to even mean? so he's gonna have aspergers?
Top

I would assume that means on the mild side of the spectrum, but it definitely is a phrasing at odds with any goal of realism.
Top

knives is correct. People that I would classify as severely autistic have severe IQ deficits, some never speak. There's even a hypothesis that they don't even see or perceive the world the same way others do. (In the sense that colors and sounds are distorted.) I don't have those issues but I do retain several of the traits associated with autism. Obsessive interest (Take a guess as to what area that is!) and being socially awkward.

I would imagine Pitt's character will suffer no IQ deficit (He'll likely be very intelligent) but will be awkward, especially around women.
Top

So is James Gray going to be making films for Plan B now as a director for hire? Probably beats working for Harvey Weinstein but his previous Jewish-Russian New York films were so distinctive that it'd be a shame if he just became a journeyman. Maybe it's a one for them, one for me thing - his personal films aren't commercial hits.
Top

I don't really think of either this or Lost City as being "one for them" in the traditional sense - this'll probably still cost less than Arrival or some other lower-budget big sci-fi movie from one of the major studios, and are developed from the outset by Gray. I think he's viewed these projects as stretching his legs - doing movies exclusively set in Queens for a decade probably exhausted him on that front, at least for the near future.
Top

thirtyframesasecond wrote:So is James Gray going to be making films for Plan B now as a director for hire? Probably beats working for Harvey Weinstein but his previous Jewish-Russian New York films were so distinctive that it'd be a shame if he just became a journeyman. Maybe it's a one for them, one for me thing - his personal films aren't commercial hits.

Wouldn't it be more intelligent to wait for the film to be made - and after it is made, to be seen - before suggesting it's a sell-out situation? Gray is making a space movie with some stars; it doesn't mean he's won't be expressing himself artistically. Are we ready to dismiss Claire Denis' sci-fi starring Robert Pattinson for the same reason?

Besides, I see nothing to suggest that Lost City of Z was an impersonal work for hire. It wasn't even a "commercial hit", apparently the benchmark for personal films as you put it.
Top

A lot of science fiction films have set out to be the "most scientifically accurate" in recent years...to me that never really seems to be the most interesting thing about them...
Top

Now there's an actor I haven't heard from in a while. If they ever make a Lewis biopic, Kennedy should play the role
Top

I approve of that casting.
Top

First image, I checked IMDB recently and now it appears this will open in January, presumably as not to collide with First Man
Top

No one knows when this is coming out yet
Top

supposedly a trailer for this should be coming next week.
Top

Unsurprisingly, this will not be opening in three weeks but instead will target the big fall festivals
Top

Probably for the best, lest every review be unable to resist doing a compare/contrast with High Life.
Top

DarkImbecile wrote: ↑
Thu May 02, 2019 3:11 pm
Unsurprisingly, this will not be opening in three weeks but instead will target the big fall festivals 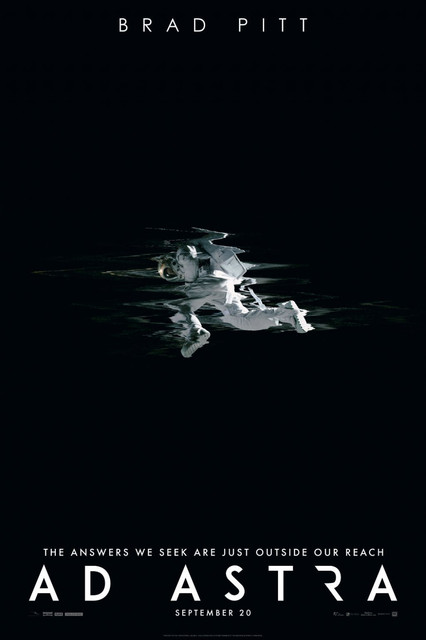 Dreadful trailer music. The film is likely to be a lot more cerebral than that score suggests. I get the impression that most of the trailer is from the first and perhaps second act as it feels mostly like exposition. The images are lovely, especially that corridor shot of Pitt bathed in red light. The poster is fantastic. I'm a Gray fan and this is my most anticipated film after Lighthouse, Parasite and Portrait of a Lady on Fire.
Top
Post Reply
109 posts