domino harvey wrote: ↑
Wed May 22, 2019 12:55 pm
I don’t see how else to read furbicide’s response under the excerpt they posted, but I welcome clarification if that was not their intent

I took it as furbicide presenting the excerpt with the sort of understood implication that IF it's a fair representation of the film and how it uses language, then it's a problematic choice.
Top

I’m another one with waning excitement. I hope my new found skepticism is short term.

The Fox Searchlight amount is crazy surprising. A 3 hour film about a pacifist Austrian farmer during WWII directed by one of the most artistically divisive directors out there. Wow. Can’t wait for the publicity angle. Would love to hear how those negotiations went.

FS must be confident in its awards prospects to throw that kind of money around, especially since I don’t think any of Malick’s recent films with big names like Ben Affleck, Ryan Gosling, Natalie Portman, &c made very much money. At least with Tree of Life they could put Brad Pitt and Sean Penn on the poster, who is even in this that average moviegoers would know?
Top

^ At best, I imagine Bruno Ganz from Downfall and even that's probably a stretch.
Top

Re the $12m winning offer, perhaps Amazon were among the bidders and Fox Searchlight had to dig deeper into their pockets than they might have otherwise?
Top

Yeah, I imagine they must have had competition that drove the price up, hard to imagine that was the opening offer. Not sure who else would be bidding so much, though-- maybe Netflix looking for another prestige title this year?
Top

I believe the 12-14m does cover some international rights (including, presumably, the UK and other English-language countries) but even so, this does feel like at the high end of sale figures. Weren't there some raised eyebrows at Amazon spending $14m for a comedy (Late Show) at Sundance in January? That's why I'm thinking FS had to have had competing bids from at least one streamer as I can't imagine any traditional distributor spending these figures on a single title, let alone a film like this one, in a theatrical market that's ever more difficult to navigate. If you read, say, Tom Bruggemann's box office analysis of arthouse titles over at Indiewire every Sunday, almost every niche film is struggling(or has been for some time) to attract an audience UNLESS it's had sensational reviews and/or increasing/sustained advance buzz or it's a documentary with an appealing topic like last year's Free Solo or Neon's Franklin concert doc Amazing Grace which is currently holding decently. FS must be feeling very confident about their marketing and the prospects for this (though to be fair, Sony released the three hour German language film Never Look Away to respectable results earlier this year or late last year, I don't remember exactly, but again, the Oscar nomination must have helped attract and sustain interest).
Top

domino harvey wrote: ↑
Wed May 22, 2019 12:55 pm
I don’t see how else to read furbicide’s response under the excerpt they posted, but I welcome clarification if that was not their intent

I took it as furbicide presenting the excerpt with the sort of understood implication that IF it's a fair representation of the film and how it uses language, then it's a problematic choice.

Yeah, not sure where 'writing off all Germans' came from when the hero of the film is meant to be Germanic himself?! Unless there's a reason to think that Nick James is badly misrepresenting the scene that he is describing (and I'm not sure why anyone would expect that to be the case; does he have a track record of doing such things?), then I don't see why we need to be coy about drawing some conclusions from his review.

If you disagree about that, then I hope we can at least agree on a hypothetical level why making sympathetic German/Austrian characters speak English and bad German/Austrian characters speak German would be an offensive decision, in that such a technique plays into old racist Hollywood representations of antagonists as 'villainous foreigner' caricatures, along with broader societal xenophobic tropes about the foreign tongue as dangerous or untrustworthy, and so on.

That's a risk in any film that sets up such a divide, but if the English-speaking protagonist were supposed to be, say, French, at least it would be somewhat artistically justified (as a way of authentically representing the character's own experience of inability to understand what is being said, etc.). This technique – as described – just seems gratuitous and thoughtless, however.
Top

Have to agree that bad or angry characters speak German and everything else is English sounds like a choice that's very beneath Malick.
But maybe it's representative of an approach that is seen as very commercially viable.

domino harvey wrote: ↑
Wed May 22, 2019 7:54 pm
Yeah, I imagine they must have had competition that drove the price up, hard to imagine that was the opening offer. Not sure who else would be bidding so much, though-- maybe Netflix looking for another prestige title this year?

According to The Hollywood Reporter, Focus, Paramount, Sony Pictures Classics, A24 and Netflix were all interested.
This has to be a really commercial film by Malick's standards, or else they all saw a way to sell it.
It also has a very mainstream oriented distributor in France.
Last edited by Cde. on Thu May 23, 2019 2:54 am, edited 1 time in total.
Top

I'm loathe to weigh in before seeing the film, but I seriously doubt Malick personally has that schematic idea of German language = evil in mind, seeing as he is fluent in German and even translated some Heidegger.
Top

My presumption is that it'd probably be less about his own personal prejudices or ideas than about what he believes his audience will comprehend / respond to. But of course it's impossible to know his precise motivations unless he's asked about this topic or chooses to address it himself.
Top

Winner of the Prize of the Ecumenical Jury at Cannes.
Top

That's a terrific trailer. It has me all juiced again after the mixed reviews.
Top

Beautiful. Glad to have him sort of back. What are the chances of this being an award player though?
Top 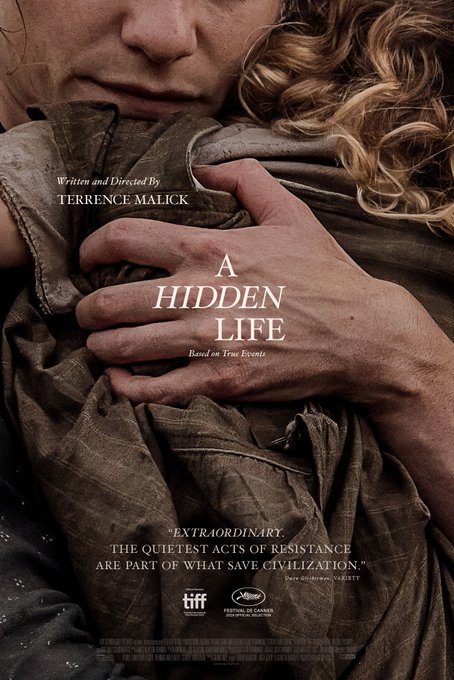 I would guess that Disney would want to show it's muscles in this regard and show that Fox Searchlight is a priority, unless they feel something else is worthy of pushing in that direction.
Top

From the opening shots I was expecting more saccharine, wide angle navel gazing but there actually seems to be a narrative there, and a relevant one. Surprised it lacks his usual Hollywood cast, almost mistook the lead for Alexander Skarsgård.
Top

Well, this is my must-see of the year. That trailer is hauntingly beautiful.
Top

It will open December 13th. I can’t recall. Did Fox Searchlite shell out all that money before Disney took over Fox? Will Disney give this a real Oscar push?
Top

From a timeline perspective, IIRC, the movie was reportedly bought for a small fortune at Cannes.
Top

Yes, the Searchlight pickup (which was reportedly worth between $12-14 million) happened the day after the premiere, so well after the Disney buyout was completed. Searchlight is supposedly the only Fox division left mostly untouched, mainly because of its awards track record. (Not that I expect this to last: we already have a report of an executive fretting that Jojo Rabbit might "alienate Disney fans.")
Top

The poster is very nice; the trailer didn't do much for me personally.
Top
Post Reply
182 posts