Discussion and info on people in film, ranging from directors to actors to cinematographers to writers.

Not to mention McNamara and Rumsfeld.
Top


Self-named Weegee the Famous, Fellig was a street photographer that began working in 1930s New York chasing police cars and ambulances to capture life and death in the city. His work appeared in Vogue and Life, among other newspapers and magazines.
...
“Weegee may not have singlehandedly invented the noir sensibility, but without him, noir would be unimaginable,” said Morris. “He recognized he was constructing his own vision of reality, replete with vivid characters — rich, poor, depraved, and otherwise.”

I'll be curious to see if they stick with that title if and when it reaches these Scottish shores!
Top


But a form that was a Morris signature—long interviews with single subjects—has found itself in a purgatory governed by emerging rules about “normalizing” men like Bannon, someone whose inflammatory populism fueled Breitbart News before he imported it to the White House. “American Dharma” has now become its own unknown known, something we know that we do not know, a film generating plenty of coverage and opinions but very few screenings.

“It’s not a First Amendment [issue] because it isn’t the government suppressing free speech, but what is it?” asks Morris. “What is it when we’re just afraid to actually engage views that we find contrary to the way we would like to see the world?”

I invited Morris to the Nieman Foundation after arranging a campus screening of the documentary. One journalist cautioned me that showing the film could be “controversial” for Nieman. Someone asked if I thought there would be protests. I was bewildered by any suggestion that journalists should not see this work for themselves.

He seems to have been particularly fed up with the situation today: 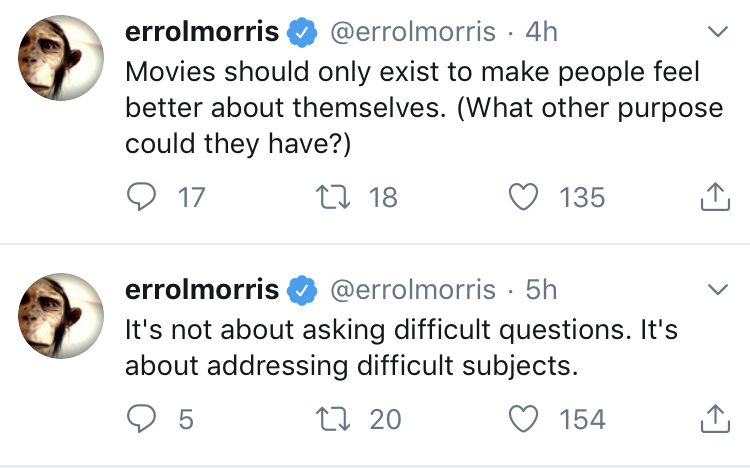 I've seen it. It's perhaps Morris's "best looking" film and the cutaways to scenes from Chimes at Midnight, My Darling Clementine and Twelve O'Clock High are effective and revealing in how they get Bannon to engage on what they mean to him. The problem isn't that it "gives a platform" to Bannon: it's that it does exactly what he wants in painting him as this all powerful prince of darkness instead of calling out his bullshit, exposing the contradictions in his supposedly "working class" agenda.
Top

Isn't painting him as a prince of darkness enough?
Top

No. Because that only works on liberals. And clearly it wasn't enough to keep Trump out office.
Top

The thing about Bannon now is that he's really persona non grata in Trump's world because he couldn't meet whatever ever rotating standards they all have. He's lost a great deal of his influence and really just seems to appear every now again like some sort of reoccurring cyst to remind everyone what a terrible person he is. I'm not shocked that companies don't want to release the film.
Top

No. Because that only works on liberals. And clearly it wasn't enough to keep Trump out office.

I haven’t seen Dharma, but I know Morris took an undue amount of shit for not “nailing” Rumsfeld in The Unknown Known, when that’s a totally unreasonable standard for a documentary built on interviews with a contemporary political figure. If the film accurately conveys Bannon’s worldview, does it need to hold the audience’s hand to make it clear that neo-fascism isn’t cool?
Top

DarkImbecile wrote:I haven’t seen Dharma, but I know Morris took an undue amount of shit for not “nailing” Rumsfeld in The Unknown Known, when that’s a totally unreasonable standard for a documentary built on interviews with a contemporary political figure. If the film accurately conveys Bannon’s worldview, does it need to hold the audience’s hand to make it clear that neo-fascism isn’t cool?

If a film doesn’t serve as a mouthpiece for my political views, what good is it?

Also I don’t like Michael Moore because he’s too on-the-nose.

No. Because that only works on liberals. And clearly it wasn't enough to keep Trump out office.

I haven’t seen Dharma, but I know Morris took an undue amount of shit for not “nailing” Rumsfeld in The Unknown Known, when that’s a totally unreasonable standard for a documentary built on interviews with a contemporary political figure. If the film accurately conveys Bannon’s worldview, does it need to hold the audience’s hand to make it clear that neo-fascism isn’t cool?

That's not my critique at all. My critique is that it builds him up as this all powerful Sauron figure instead of interrogating the contradictions in his "populism." Those contradictions are also key to his worldview. The best parts of the movie show Bannon discussing all those who've been left out from the turn towards financialization and deindustrialization. I wish Morris had kept up with that line of inquiry as it explains far more about Trump/Bannon's rise (as well as similar parties in Europe) than "everyone just wanted to be mean."

It's a good film. I'm not at all saying "i wish it had been more SCATHING" about Bannon. I'm saying: when Morris pushes back against him, which he does constantly, I wish he had tried something other than basically just accusing him of being bad/beyond the pale or straight up saying "I'm afraid of you!" which he does in fact say.
Top

Sometimes I think that Morris's epistemological project—which is different than the politically critical project that many seem to want these films to be—just doesn't end up being as interesting as he seems to think it is. Was his interview with McNamara really all that revealing of the motivations of a man who brought us deeper into a massively deadly war in Southeast Asia? I came out of it kind of angry that Morris did not provide the sort of historical context that would reveal McNamara's rationalizations to be thin and self-serving (for instance McNamara repeatedly claimed ignorance of basic facts of then-recent Vietnamese history—saying something like "we didn't know about these things"—but those facts would have been available in widely-read books in the 1960s), not because I wanted Morris to grill him necessarily, but because McNamara's testimony in itself just wasn't that interesting. I mean, the bare spectacle of a man haunted by his past actions is somewhat compelling, but to me the film mostly offered various flavors of that spectacle and little more to chew on.

I have to admit to being particularly skeptical about this project. Morris seems to take on big names like McNamara and Rumsfield in part because he's famous enough to get their attention, and because taking on a big name flatters his own sense of importance. There are worse reasons. But the problem here, as people noted above, is that Bannon just isn't that important anymore, and arguably never really was. He doesn't have a constituency of his own, except a handful of kooks. Bannon seems convinced that he provides or provided Trumpism with some intellectual armature, but that was never really true. I'm not sure Trump needed Bannon to grope his way toward the sort of revanchist populism he's embraced—it seemed a natural fit from the beginning. In other words, Bannon served a purpose—connecting Trump with the world of right-wing niche media— but it's one a number of figures might have served, and Trump and his administration never found much use for Bannon's crackpot Huntington-esque theories of history, etc.

In this case Morris making Bannon the subject of a film might be seen to serve largely to inflate Bannon's sense of self-importance.
Top

Morris' latest print/audio piece for The New York Times: "The Pianist and the Lobster"
Top

Morris' Steve Bannon documentary American Dharma has finally secured a distributor for North America, and should get a limited release before the end of the year.
Top

American Dharma was just uploaded to Kanopy for those with a library card.
Top

Glad to be able to finally see American Dharma. It's also no wonder this got such an acidic reception given how this isn't strictly speaking a political film in the way people probably wanted. Of course that type of scold would not only be a very boring movie, but also out of character for Morris.

Instead, like recent masterpiece Tabloid, this is a self reflective work about the guilt well educated liberals such as Morris have for allowing the whole in the ground grow wide enough to allow Bannon to escape. Perhaps the most damning and dirty moment is when Morris, who is on camera more often than ever in his career, admits to voting for Clinton with Bannon almost speaking for Morris asking how the person who made Fog of War could be so blind to the political situation as to do that. Bannon means this in a way different than Morris seems to take it, but it's a damning moment all the same.

This and many other scenes had me thinking about this in connection to the other two White House interviews connecting it ultimately to Cormac McCarthy. I remember reading a critique years ago treating the judge, Anton, and the old man as one character at various levels of strength representing an aspect of America as it rots. McNamara, Rumsfeld, and Bannon seem to represent that in a reversed exploration. McNamara is the reflective political figure who has no reputation to protect while Rummy still had a perceived image to protect though basically had no goals for the future so no schemes. Bannon on the other had is still all venom like the snake biting at the heels of the horse. Though that doesn't make him as powerful as the judge. He actually comes across quite pathetic unable to separate fiction and reality with an understanding of history born from westerns and war flicks. Towards the end there hints of the upcoming Rummy and McNamara eras for Bannon, but that's already been explored.
Top

I wonder if he'll ever make a theatrical feature again. He seems to thrive in the world of pay cable and streaming.
Top

Morris himself is subjected to his own Interrotron — along with other techniques he pioneered and/or popularized — as part of an FX limited documentary series from Marc Sterling (The Jinx) critically adapting Morris’ book on the Jeffrey MacDonald case, A Wilderness of Error.
Top

That's great! The Little Gray Man episode is interviewing Antonio Mendez, who was the figure that Ben Affleck played in Argo.
Top

Wow, I just finished watching My Psychedelic Love Story tonight and the subject matter, Johanna Harcourt-Smith, spent nearly 102 minutes delivering verbal diarrhea. I'd really have to delve deep into my memory to recall a documentary as pointless as this one. A great example of making an interesting period of history and a fascinating person such as Timothy Leary appear to be nothing more than a footnote on history. And having sat through Alexander Nanau's complusive and far superior Collective did not impair my judgement of the Morris film.
Top
Post Reply
74 posts