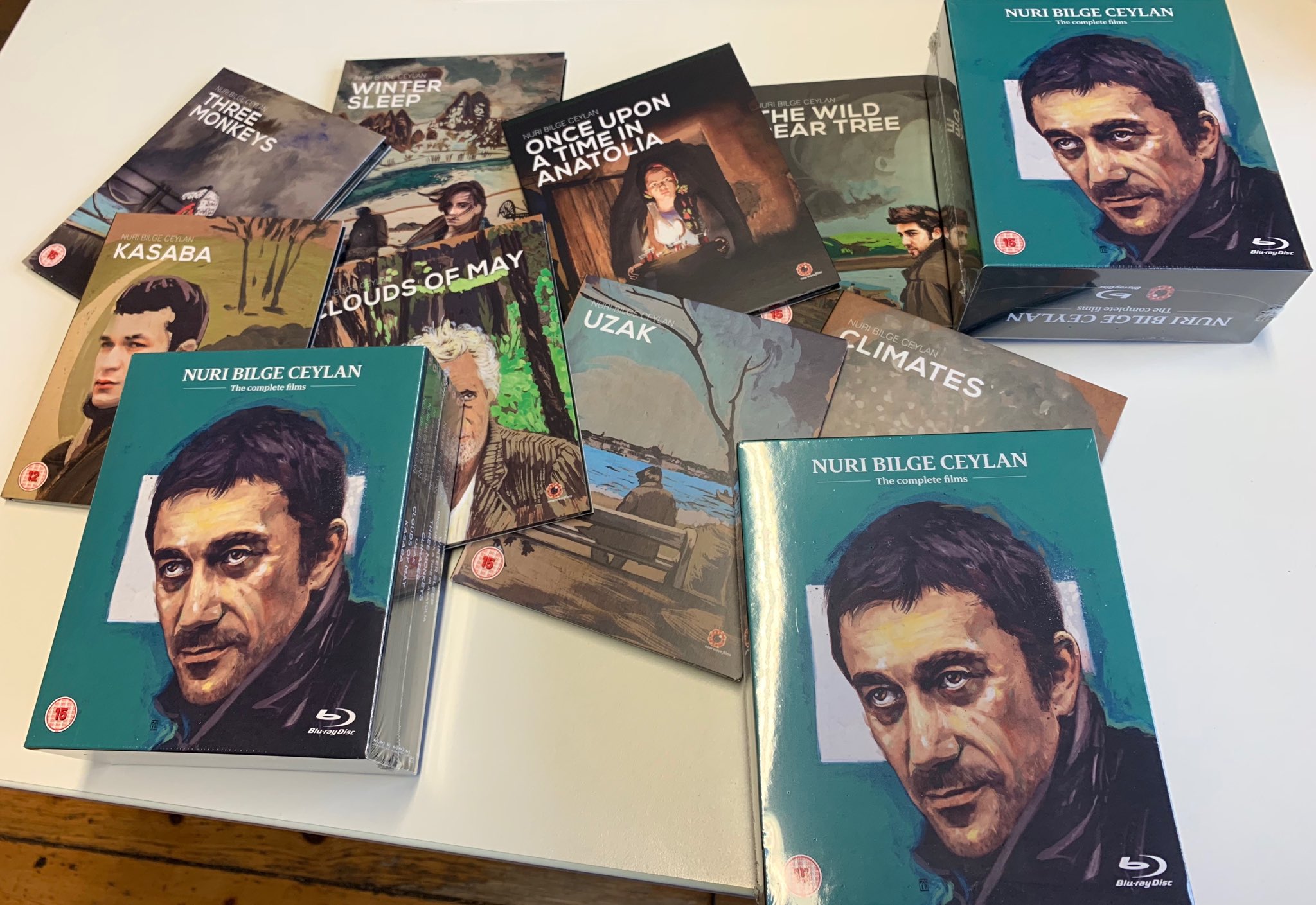 Not surprised. I guess only the shorter cut has been restored.
Top

Just received this today. I checked out the region free discs and they all look great. The color and the grain have the expected filmic quality. The digitally shot Climates also looks really good.

I have zero familiarity with Ceylan's work beyond the names of his recent films but I am impressed by the bits of the films I saw. Very excited to explore the set when I get the time.
Top

I received my set the other day and did a comparison of the DVD release with the Blu Ray restorations and its like night and day. This is one of the best releases of the year and I can live with the shorter cut of Clouds of May because the Blu Ray is such an improvement over the DVD I don't think I would ever watch it again.

Packaging was top-notch as well. Big pat on the back to New Wave.

A thicker outer box would have been nice, rather than the more skimpy dented up one I got (well, make that had).
Top

I didn't post here when I watched Kasaba, but it was arrestingly beautiful, the fascinating progression of an ordinary day from sunlight to firelight, and certainly it's become my favorite cinematic campfire conversation.

Clouds of May is the apparently Kiarostami-influenced followup, showing a wry and harried filmmaker with very bad posture recruiting family members (Ceylan's parents?) to make a film that looks very much like Kasaba. It takes a step back from the drama of Kasaba with a look at the artificiality and difficulty of "naturalistic" acting, while immersing us in an equally engrossing if less fraught set of relationships. Returning, with frequent closeups, to the faces of the mother and father gains meaning not just from the connection with the previous film, but also the past stories from the world of this film, some only hinted at in the old camcorder footage, which shows the elegiac richness that banalities often have when accidentally preserved from the past. Other parts are less heady and more amusing, such as the turtle the filmmaker and the boy play with (refreshing in comparison with the turtle that gets such a raw deal in Kasaba!) and the outcome of the egg subplot. I still can't help but smile at the
SpoilerShow
well-deserved fate of that stupid basket of tomatoes!
Top

Moving on in good time to finish this set by 2023, Uzak is an empathetic picture of two men who share a physical space while entirely failing to connect with each other. One, Muzaffer Özdemir's slouching photographer, who displays the same attitude of weary resignation that his character did in Clouds of May but none of the creative energy, seems to be actively avoiding such a connection, while the other, the younger relative visiting from the country, trying to find work and half-heartedly stalking girls that he can't bring himself to even try to speak to, would probably accept it if it was offered but has other problems on his mind. It's full of strikingly beautiful images arising out of pedestrian surroundings - the overturned ship, the sheep on the hillside in golden late-afternoon light, the line of worshipers in the mosque - which the characters sometimes ignore and sometimes, more sadly, notice but can't make themselves actually care about. However, it's also full of understated comedy (to an even greater extent than Clouds of May, which had a bit of similar material), laughing wryly at the the dialectic between Tarkovsky and porn. After all, if we don't laugh, we'll cry...or rather, perhaps we'll sigh in hopeless ennui, gaze at our loved ones from an impotent distance, and glare at the ships on the canal.
Top
Post Reply
34 posts